The spray lance shown in the previous post was designed to be inserted into a vertical column with a turbulent airflow. An important question that had to be answered was whether the flow across the spray lance would induce vibrations within the spray lance that would lead to vibration or even to failure. Since the system was in the design phase, it was necessary to use computer simulations to investigate the expected performance of the system. A transient CFD analysis was performed to estimate the velocities that would be found within the system during normal operation. 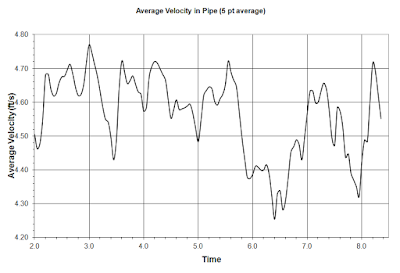 A Fourier analysis of this velocity signal yielded a frequency spectrum for this velocity profile as shown in the figure below. This plot shows that the primary frequencies of the velocity are found below 10 Hz, with the two main frequencies at approximately 2-4 Hz. 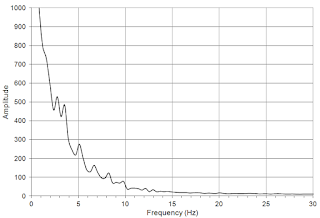 This second look shows that there are no strong forcing frequencies found at the first or second natural frequencies of the spray lance. Like the results from the velocity analysis, these results also suggest that the configuration is unlikely to experience vibration due to the flow across the spray lance.

The method outlined in these two posts is a simple approach to looking at flow induced vibration. A complete analysis is far more complicated and takes more factors into account. This method however can be used as a screening tool to find potential problems. For example, if the velocity were at or near the critical velocity or if the frequencies in the velocity were found to be near the natural frequency of the spray lance, it would indicate that there was a strong possibility that excessive vibration would exist when the system was started. In this were indeed the case, more investigation or a redesign of the spray lance would be required.
Posted by Keith D. Robinson, P.E. at 6:00 AM No comments:

In a recent project I had to design a spray lance to be inserted into a large vertical column. In an early design iteration, it was necessary to determine if the spray lance would suffer from flow induced vibration once the system was started. Since the system did not exist and there was no data about how it actually worked, a computer study of the system was performed to investigate the possibility of flow induced vibration.

One of the useful tools in most FEA packages is the ability to determine the natural frequency of a part very quickly. Using FEA to determine the natural frequency rather than a using a hand calculation can help reduce the time and effort required to study the dynamics of a system. This is especially true if a part undergoes many design changes and the FEA package is linked to or part of the CAD package.

Part 2: What is the basis for using ACH as a design parameter?

In a previous post I examined how the concentration of a pollutant decreased over time as a function of different ventilation rates. This examination was limited to the case where the pollutant was at some fixed level in a space and then ventilation was introduced into that space. An example of this situation would be a pollutant leaking from a pipe into a closed room and then a valve being closed which stops the flow of the pollutant and then a fan being turned on to provide ventilation to the space. While this scenario is possible, it is probably more useful to examine the case where a pollutant is being emitted at some rate and ventilation is being supplied to attempt control the level of that pollutant. For simplicity, it will be assumed that the initial concentration of the pollutant is zero. With this simplifying assumption, this case can be modeled using a relatively simple differential equation:

This equation comes from ACGIH's book Industrial Ventilation A Manual of Recommended Practice. As with the previous case, the units for each of the parameters must be consistent. If G is given in CFM, then the time will be minutes and the volume will need to be given in cubic feet. So what impact does changing the ACH have upon the concentration of the pollutant in a space? For this example, it is assumed that the rate of pollutant generation is 1 CFM (0.5 L/s) in a room with a volume of 10,000 cubic feet (283 cubic meters), a space roughly 29’ wide x 29’ long x 12’ tall (8.8 m x 8.8 m x 3.7 m). 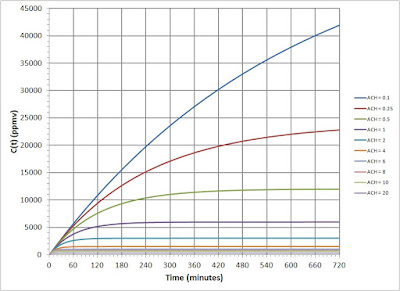 It can be reasonably concluded that using the ACH as a design parameter for a ventilation system has merit. However, it is necessary to again mention that several simplifying assumptions were made in the previous analysis which can have a dramatic effect upon the performance graphs presented here. The limitations of this method will be examined in an upcoming post.
Posted by Keith D. Robinson, P.E. at 6:00 AM No comments: 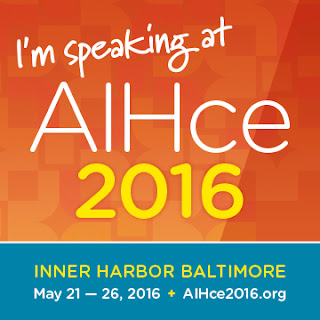 Keith D. Robinson, P.E. will be teaching a course entitled PDC 109:  Understanding and Using ANSI/AIHA/ASSE Z9.2-2012 at the upcoming AIHce conference. This course provides an in-depth look at the requirements for Local Exhaust Ventilation (LEV) systems that are set forth in this standard. It is intended for Environment Health & Safety (EH&S) personnel, facility managers, system operators, and engineers.

The System Curve, The Fan Curve, and the Operating Point Lunch and Learn

The Lunch and Learn will be held at 12303 Airport Way, Suite 200 in Broomfield, CO. Space is limited to 10 participants. Please contact Keith Robinson at kdr@kdrobinsonpe.com or at 303-746-8904 to reserve your spot.

See my profile on Linked-In

Keith D. Robinson, P.E.
Mr. Robinson is a Professional Engineer in Colorado Springs, CO. He has extensive experience analyzing and simulating mechanical systems to determine performance and causes of failure. He has more than 15 years experience using both Computational Fluid Dynamics (CFD) and Finite Element Analysis (FEA) software. Mr. Robinson has a BSME from the University of Colorado, Boulder and a MS Engineering Systems from the Colorado School of Mines.